Iowans are all about the add-ons!

Our favorite pumpkin spice product, according to our own Google searches, is pumpkin spice syrup. Now let me ask you this, why in the heck would you want this? I mean, to each his/her own, but really? Are we making PSLs (pumpkin spice lattes) at home? I don't get why you'd want to have a liquid version of pumpkin spice. And don't get me wrong, I'm NOT anti pumpkin spice. At all. I just don't get the need for a liquefied version.

Get our free mobile app

If you're curious to see what every different state wound up choosing, or Googling, check out the map below. 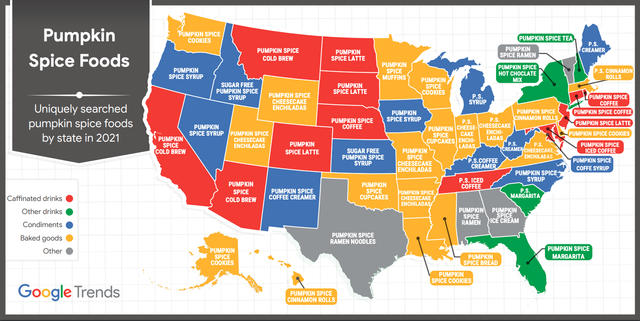 LOOK: Here are the pets banned in each state

Because the regulation of exotic animals is left to states, some organizations, including The Humane Society of the United States, advocate for federal, standardized legislation that would ban owning large cats, bears, primates, and large poisonous snakes as pets.
Read on to see which pets are banned in your home state, as well as across the nation.
Filed Under: iowa, nl, Pumpkin Spice
Categories: Articles
Comments
Leave A Comment
Back To Top